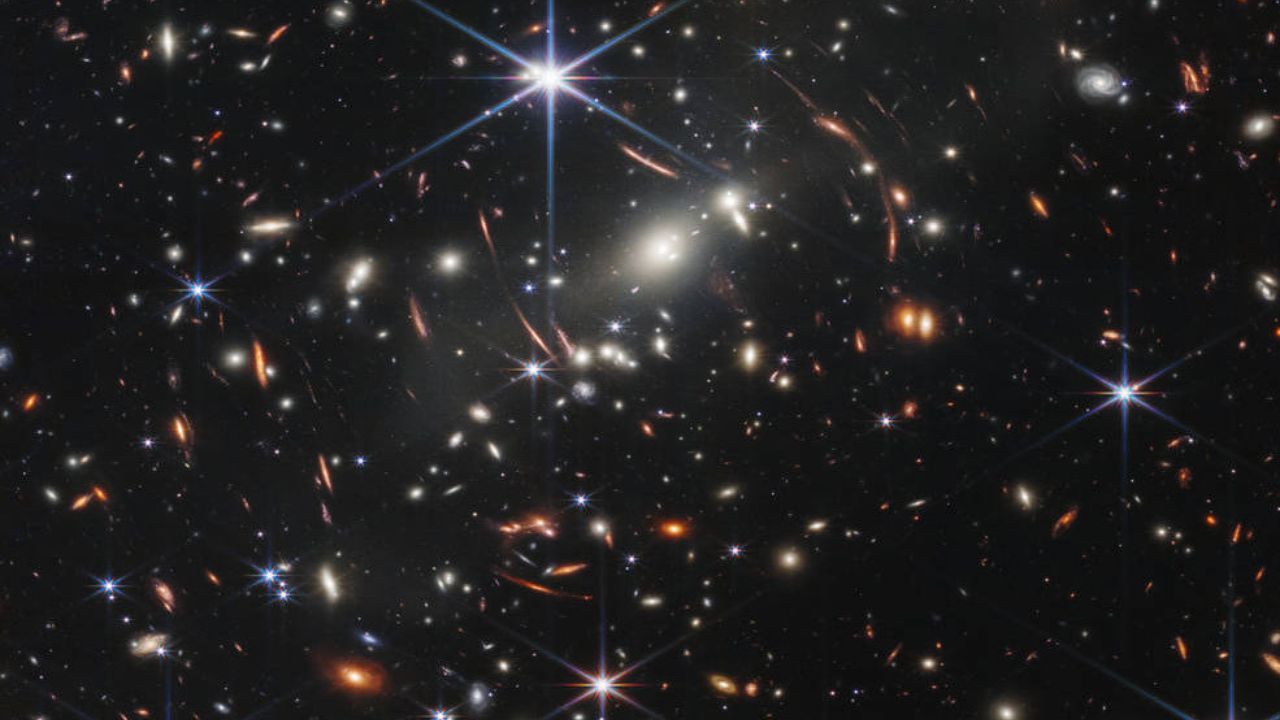 Imagine looking at a single grain of sand on your finger-tip at arm’s length, that’s what the James Webb Space Telescope has captured by focusing on one single dot in the universe – the sharpest infrared image ever taken in the history of human space endeavour

After seven long months of its launch, the largest most-sophisticated telescope ever built by humanity, the James Webb Space Telescope has revealed its very first picture – and it’s absolutely stunning.

Earlier on July 11 (July 12 according to IST), US President Joe Biden revealed the very first full-colour image taken from the James Webb Space Telescope. The picture reveals a patch of deep, dark space background full of thousands of glittering galaxies.

This first publicly revealed image taken from the James Webb Space Telescope is also reportedly the highest resolution image of the infrared universe anyone has ever seen, according to NASA. This isn’t hard to believe because, after the Large Hadron Collider, the James Webb Space Telescope is probably the most sophisticated scientific instrument ever built and operated by humanity.

The JWST is the culmination of over three decades and several billion dollars of effort to undertake never-before-attempted scientific research from deep space.

As for the historic first image captured and made public by the James Webb Space Telescope, it has been christened its own name, the “Webb’s First Deep Field,” according to reports. The image specifically shows galaxy cluster SMACS 0723 in unprecedentedly clear detail, captured of course from JWST at an orbit that’s 1.5 million kilometres away from Earth.

Is JWST’s first pic the oldest pic of the universe?

As sophisticated as the James Webb Space Telescope is, fundamentally it’s aimed at doing space imaging largely in the infrared spectrum of light – which is not the oldest light in the universe, in case you don’t know.

This fact is confirmed by JWST’s official Twitter handle, too. It says that Webb’s First Deep Field image “isn’t the farthest back we’ve observed” the universe. “Non-infrared missions like COBE & WMAP saw the universe closer to the Big Bang (~380,000 years after), when there was only microwave background radiation, but no stars or galaxies. Webb sees a few 100 million years after the Big Bang,” it highlighted in no uncertain terms.

What was JWST focusing on for the image?

This is the most amazing part of the James Webb Space Telescope’s first-ever image, what the telescope was looking at in the night sky, where its lens was focused on for less than a day to reveal the image we are now calling it the Webb’s First Deep Field.

This is how NASA’s Bill Nelson explained it to US President Joe Biden, during the official unveiling of the image. “If you held a grain of sand on the tip of your finger at arm’s length, that is the part of the universe that you’re seeing (in this picture)… just one little speck of the universe,” NASA Administrator Bill Nelson said. “You’re seeing galaxies that are shining around other galaxies whose light has been bent.”

What’s next for the James Webb Space Telescope?

According to NASA’s Bill Nelson, the James Webb Space Telescope is just getting warmed up, just getting started to do what the Hubble Space Telescope could never physically do – which is to look back at the very beginning of the universe immediately after the Big Bang.

According to a PBS report, the NASA Administrator hinted that future images from JWST will capture a time even farther back into the ancient universe to about 13.5 billion years ago, “almost to the beginning.”

This isn’t all, as James Webb Space Telescope’s nothing short of a full-fledged science lab in deep space, and its on-board cutting edge capabilities will help NASA researchers on the ground here on Earth analyze not just static images of the early universe, but also the chemical composition of the atmosphere of planets beyond our solar system, and whether they can sustain life on them.