The OnePlus 10T 5G is set to launch globally on Wednesday, August 3. The launch event will be hosted on August 3 at 7.30 PM in India. This will be OnePlus’ latest premium smartphone equipped with flashy flagship-grade specifications one would expect. The device will launch as the OnePlus Ace Pro in China on August 3, as well. OnePlus has already begun divulging some information about the upcoming OnePlus 10T and with the latest teaser on Weibo, the company has revealed key display specifications and features of the device. Let’s take a look.

OnePlus confirmed the key specifications and features of the OnePlus 10T 5G’s display on Weibo. The OnePlus 10T aka OnePlus Ace Pro will flaunt a sizeable 6.7-inch AMOLED panel with Full HD+ resolution and support for 120 Hz refresh rate. The panel will come with a touch sampling rate of 720 Hz, meaning it should be very responsive to touches. 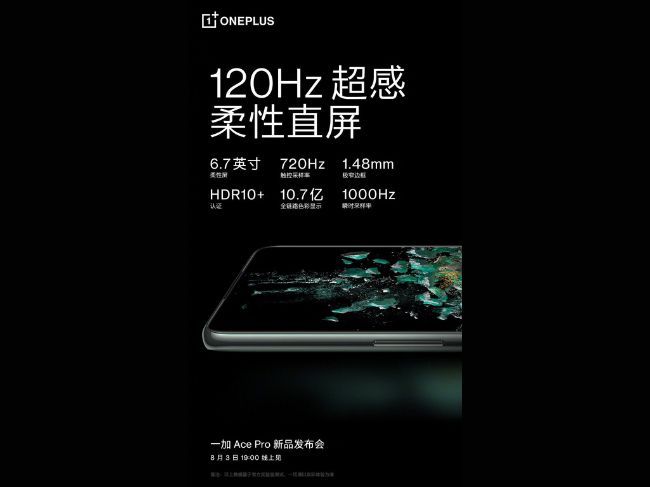 The OnePlus 10T 5G’s display will also come equipped with HDR10+ certification and 10-bit colours. The teaser also suggests that the phone will have narrow 1.48 mm bezels. Unlike the OnePlus 10 Pro, the 10T 5G comes with a flat display and a centre-aligned punch-hole cutout for the front camera.

The OnePlus 10T will be powered by the latest Qualcomm Snapdragon 8+ Gen 1 SoC. As per leaks, the phone will feature a whopping 16 GB of LPDDR5 RAM, making it the first OnePlus device with this amount of RAM. As per reports, this will be one of three RAM variants, the others being 8 GB and 12 GB models. Reports also suggest that the phone will come with 256 GB UFS 3.1 internal storage.

The phone will likely feature a 50 MP primary sensor, an 8 MP ultrawide lens, and a 2 MP macro shooter. For selfies, a 32 MP shooter is expected. As for the battery, OnePlus revealed the phone will rock a 4,800 mAh cell. It has already been confirmed that the phone will support 150 W fast charging. OnePlus also announced on their Community forum that the OnePlus 10T will not house its signature Alert Slider, making it the first OnePlus flagship/high-end phone to ditch this feature.

The phone is expected to run Android 12-based Oxygen OS 12 out of the box and come in two colours – Jade Green and Moonstone Black. The Indian pricing is expected to start at Rs 49,999 for the base model.